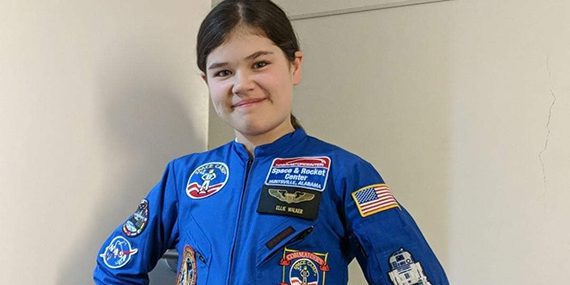 Hey, my name is Ellie Walker and in October 2018 I received the incredible opportunity to travel to America and experience Space Camp, as well as California Science Center, Disneyland, Universal Studios, and Northrop Grumman. I have always had an interest in science and space, but never knew how amazing and interesting it was until I made the trip to Space Camp. When at camp, we participated in a wide range of activities and once in a lifetime experiences, from acting out missions, to constructing your own rocket and launching it, to designing a digital base that could support human forms on Mars! While all of this was really cool, the thing you take away the most from the experience is an understanding and appreciation for the whole universe and beyond that surrounds us, and that we really are just a small, miniscule speck in the the whole wide cosmos, and what is yet to be discovered out there? But overall, it wouldn’t have been the same experience without meeting all the people that went as well, whether they came from different parts of America or came from Australia.

To start off our trip, we first went on a really long flight to America that took around 14 hours, but it was fun as you had your own little screen where you could play games and watch whatever movie you’d like! When we first arrived in L.A, we hopped onto a shuttle bus, and off we went to explore the actual Northrop Grumman buildings! It was really interesting to walk around and see all of the diverse models of different aircrafts, or looking at informative facts about many different apparatuses. Then, we finally arrived back at our hotel, I was so surprised when I found that we were actually just up the road from Disneyland. When we first finally entered our hotel, we attended a very instructive talk from SpaceX! Then, we were sorted into our hotel rooms where we would stay for the next 4 days. On the second day we travelled to California Science Center which we saw and got to go under the actual Endeavour spacecraft, as well as looking at anything to do with Science or space, such as looking at aquariums to how an earthquake forms! On the third day, we adventured the one and only – Disneyland! It was so much fun to go on all the crazy roller coasters and see the cool parades. The next day we got ready to go to the equally exciting Universal Studios! Through all of the rides, my favourite activity there was the tour, where a guide took you all over the famous and classic film sets of many movies, as well as being a part of special effects and being behind the scenes of the Studio. On the fifth day, we started the day with an early start and we began to take the really long journey to the best part of it all, Space Camp! We arrived in Huntsville, Alabama and finally caught a shuttle bus to the camp. Over the period of the next seven days, I experienced some pretty amazing things. From meeting Nasa engineers to going on rides to experience g – force, Space Camp taught me to get out of my comfort zone and try new things and taught me many cool facts about space, astronauts, stars, planets, exoplanets, astronaut ice-cream, science and engineering.

Ever since my Space Camp experience, my Dad and I have been more involved in events related to space and science outside of space camp, such as the 50 year anniversary of the moon landing celebration at the Parkes famous “Dish”, as well as checking out gatherings nearby.

In conclusion, I would like to thank Bob and Jackie from One Giant Leap for making all of this possible and for still keeping in contact! Overall, my time at space was truly incredible and I definitely would recommend going if you’re even the tiniest bit interested, because trust me, you’ll have the time of your life!