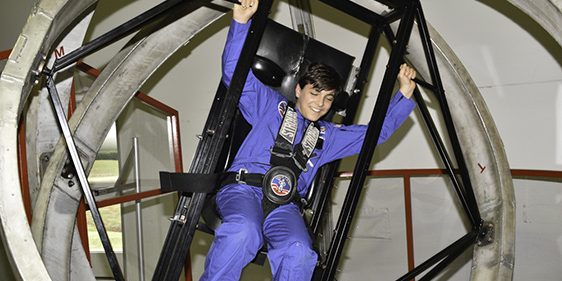 I am Aaron and I recently had the amazing opportunity to travel with One Giant Leap Australia to the U.S.A. The trip was called Space Camp, which sounds exciting enough, but it was actually so much more than that.

First stop The Spaceship Company. This is where they build spacecraft for Virgin Galactic

So much fun in Disneyland!

Our group was lucky enough to see the James Webb telescope fully extended. That is NASA’s biggest telescope ever!! What an opportunity!

The California Science Centre is the home of the space shuttle Endeavour. Chelsey Martin (LA Consul General) is amazing. She met with us and we all had a great chat!

We went to Universal Studios!!

The week in Space Camp was inspirational. The teams completed similar training to NASA astronauts.

7 beds to a room – the same as the International Space Station.

The simulators include the Multi Axis Trainer which demonstrated working in the Moon’s gravity.

When we were building rockets, we designed our rockets, and they would have a payload inside them (an egg), and you would have to design padding and a parachute for the rocket, so the egg wouldn’t crack upon landing.

The camaraderie on the trip was incredible. We were learning so many new things and doing amazing stuff, and we were having tonnes of fun along the way. I met cool scientists and engineers as well as lots of other teens from around Australia. I built friendships with other like-minded people that I plan to keep forever.

Getting the opportunity to go to Space Camp and travel with One Giant Leap Australia was awesome.

There is a whole universe of possibilities out there!